Structural racism is a hot topic these days. And in some instances, it can be hard to visualize the structures that oppress particular races or even how a structural decision could be racist.

Homelessness is not one of those instances.

According to the National Alliance to End Homelessness, most minority groups make up a larger share of the homeless population than they do the general population.

It’s right there, in black and white: African Americans make up 13% of the general population but account for 39% of people experiencing homelessness and more than 50% of homeless families with children.

Other minority groups like Indigenous, Latinx, and multi-racial individuals are similarly disproportionately affected by homelessness. White folks make up a significantly smaller percentage of the homeless population as compared to the general population.

Why is that? Well, the simple answer is structural racism. Black, Indigenous, Latinx, and other people of color have been repeatedly denied rights and opportunities. Segregation and slavery are certainly two large pieces of that puzzle, but the inequities don’t stop there.

Redlining, or systemic housing discrimination, is a huge contributor to the wealth gap between white and Black households. Poverty is a huge indicator of homelessness, and African Americans are still living disproportionately in low-income neighborhoods as a result of the redlining that took place decades ago. Those communities have limited access to resources like healthcare, nutritious food, and jobs. They also have higher crime rates, lower quality schools, and fewer public resources.

Access to healthcare is another key indicator of homelessness. Those with mental health disabilities are vastly overrepresented in the homeless population. Rates of mental illness do not vary by race, but accessing treatment certainly does. Quality, affordable care for chronic illnesses and mental health disabilities is proven to be more difficult for African Americans, which puts them at higher risk of homelessness.

Racial disparity is also apparent in incarceration rates. The rate for African Americans tripled between 1968 and 2016, and is more than six times the rate of incarceration for white Americans. Criminal histories make it difficult to access both housing and employment, which leads to higher rates of homelessness. 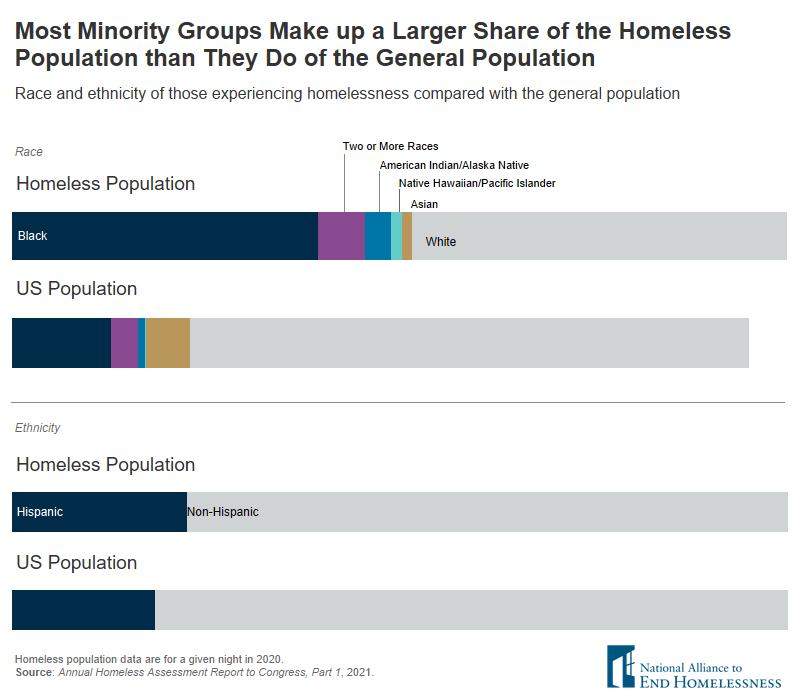 The stats quoted here are reflected in the participants we serve. Our racial demographics are similar to those in the chart for those experiencing homelessness. Many have struggled with mental health disabilities and chronic illness, without access to health care. Some became homeless after being incarcerated. All have lived in poverty.

As a society, we can do better. Homelessness is a complex issue to solve, but the causes are known. And the disparities are apparent. Aside from just supporting those experiencing homelessness, we need to start addressing the root causes: systemic racism, poverty, affordable housing, the prison pipeline, and so many others. Everyone deserves a safe place to call home, and together we can start to move those words into action.

Being a Part of Housing First Partners Conference